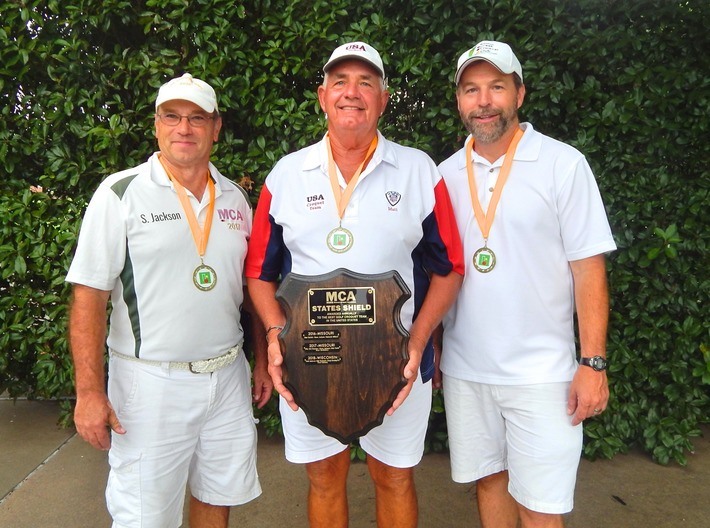 On a final day shortened by lightning strikes, Missouri rolled through Florida 6-0 to claim the 2019 Croquet Network States Shield title on Sunday, August 18, 2019, in Tulsa, Oklahoma.

Missouri had advanced to the championship final with relative ease after a 7-3 win in the semifinal against Wisconsin. On the other semifinal matchup, Florida went to the final round in their semifinal against Colorado to claim a 6-4 test win to advance. It was Vernon Pierce that got the test clincher with a 7-3 win over Steve Berry.

That projected out as a competitive championship battle on Sunday between Florida and Missouri. In fact, Florida's opening duo of Jim Teel and Pierce jumped all over Missouri's team of Matt Griffith and Matt Smith in the early stages of the opening round doubles game as they worked out to a 4-0 lead. Missouri stayed in it and battled back to take a 7-6 win. From there, momentum and the scores all started to roll Missouri's way.

Smith beat Pierce 7-3, Shield veteran Stephen Jackson beat Teel 7-4 and Griffith took down Hal Denton 7-1. That meant a 4-0 lead after two rounds for Missouri and the third round continued to tilt toward that way as clouds formed and the storm started to roll in. Smith took down Teel 7-2 and Griffith defeated Pierce 7-4 to clinch the test with the needed six wins.

With lightning closing in, play was stopped and the players agreed that there was no point to waiting  out the lightning to play the final games. The final score went down as 6-0 for Missouri.

The win now means that Missouri has taken the Shield in three out of the four years the event has been played. However, this one certainly had to be a bit sweeter. The 2019 Shield included 11 teams that narrowed down to the four teams that battled in Tulsa, Oklahoma. The 2016 and 2017 events included two and four teams respectively.

Plus, after being knocked out of a championship bid in last year's Central qualifier with a last-round run of wins by Oklahoma, Missouri came into the 2019 event with plans to field their strongest possible team. The plan was modified as highest-grade player Matt Griffith had to miss the June Quad Qualifier as he was playing in the British GC Open, but the Smith, Jackson and Ron Millican line-up came within one win of claiming the Central, falling to Colorado 6-5. However, their strong win total put them in the fourth spot for the championship as the top second place team from Quad play. As a companion event for the Shield Championship weekend, the US Golf Croquet Classic kicked off one-day prior to the Shield semifinals on Friday, August 16 with two blocks of four in action in the morning. Tulsa's Matt Baird went 3-0 in A Block and John Steninger from the Colorado Shield team went 3-0 in B Block to claim top seeds in the afternoon quarterfinals of the main knockout. Baird advanced and played his semifinal against Wendell Thompson on Friday and took a comfortable 7-3 win to advance to the final set to be played Saturday afternoon.

Steninger also advanced through the quarterfinals and in the Saturday semifinal was set to face Colorado alternate Ned Sperry who had advanced from the quarterfinals with a hard-fought 7-5 win over Tulsa's Jon Spaulding. The Colorado showdown went in Steninger's favor as he cruised to the victory 7-2.

In the final, a rested Baird took down Steninger 7-5 to claim the first annual US GC Classic title.

All players knocked out in in the quarterfinals moved into the Plate knockout where newcomers Anna Hanson and Mariah Chitwood showed a lot of one day improvement as they battled more experienced players in the semifinal. After scoring just three hoops on Friday, Chitwood in particular captured the spectators' attention as she was up 6-3 on Spaulding. Spaulding battled back though and escaped 7-6 to go to the plate final. There he faced Harold Menzel from Dallas who fended off Hanson 7-4 in his semifinal. They squared off in the afternoon heat for a tough game with Spaulding claiming the Plate title with a 7-5 win.

The States Shield Championship weekend had 19 players participate and would have had two more if Tulsa’s Joe Steiner hadn't had to withdrawal due to a heart attack on the Sunday prior to the event. The overall States Shield event had a total of 49 players and will certainly grow again in 2020 as it will likely to move to 16 teams and expand on the GC Classic concept./p>

The 2019 Shield was played in three different cities over four different weekends and that is due to the efforts of many dedicated croquet players and supporters that continue to drive this event forward. There were of course support teams for all three of the Quads played in South Carolina, Illinois and Oklahoma earlier in the summer and we thank the quad directors -- Damon Bidencope, Cheryl Bromley and Matt Smith for their efforts in managing those events.

For the Championship weekend, many of the players on hand helped with both court setup and court teardown and I thank them for their efforts. We were working on the back foot for the entire Shield season as we did lose our primary championship venue in April. I would like to thank Matt Smith and the Tulsa Croquet Club for stepping in with short notice to provide a replacement championship venue to make the 2019 event possible. In particular, Jon Spaulding and Joe Schulte from Tulsa were critical to the event as Schulte provided the truck that allowed us to store equipment near the courts and Spaulding worked hard days on the markup, setup and teardown for the US GC Classic. Matt Baird made sure drinks were courtside as players battled the August heat.

As mentioned before, we missed Steiner as a player and as part of our set up crew, but I thank him for the expanded layout tool and wish him a successful and quick recovery. And again, thank you to players in both the GC Classic and Shield for work on set up and teardown and for participating in the event. As a director and spectator, it was a fun and entertaining event and I enjoyed meeting several new players and watching some great croquet. See you in 2020. 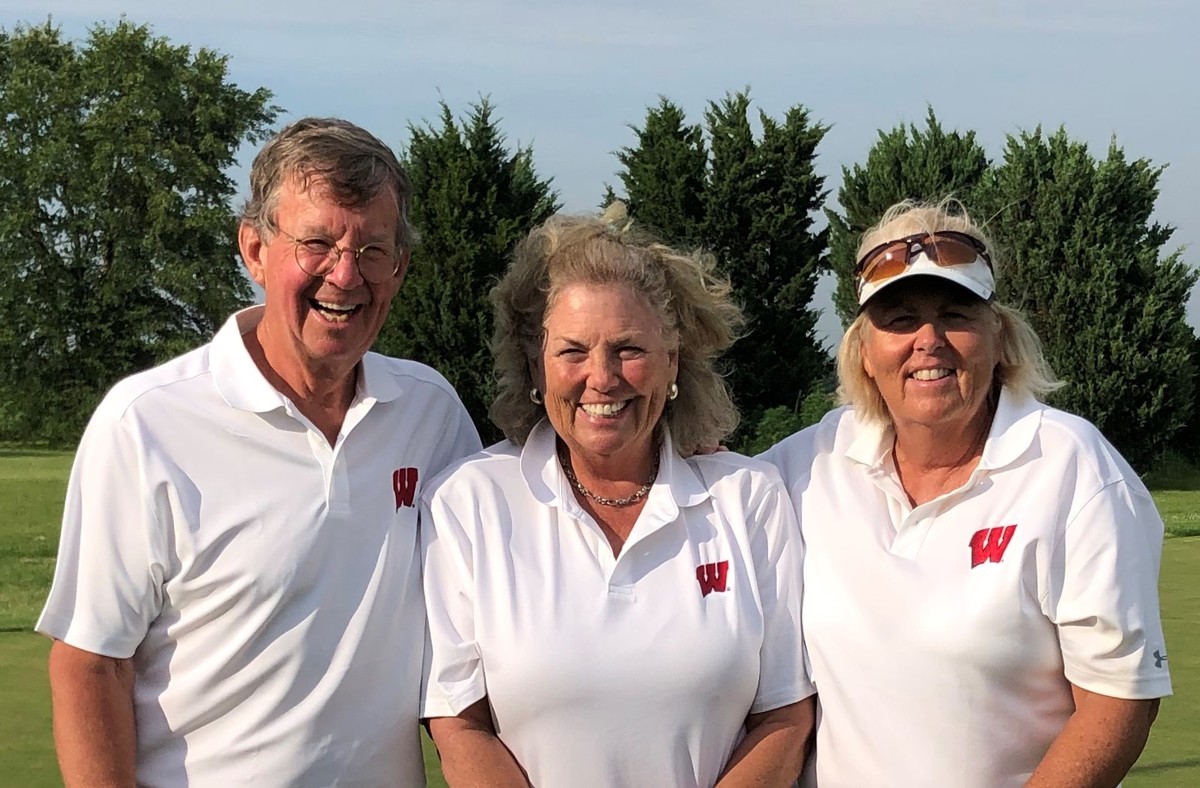 Leading up to the start of the third quad of this year’s States Shield event, there was some uncertainty if it was actually going to happen. Two weeks out, the Illinois team of previous years had to be reorganized due to work and schedule conflicts and thankfully Jeff Lee of Chicago was able to secure Matt Brown and George Saad for the team.

One week out the players got the word that the Minnesota team had to withdraw due to schedule conflicts, however, with the Indiana, Wisconsin, and Illinois teams intact, the Midwest Quad was able to go on.

If you ever find yourself in the Chicago area, I highly recommend checking out the Prairie Lights Croquet Club located an 1-1/2 hour drive southwest of the city. You feel as though you’ve literally stepped into the movie Field of Dreams. I couldn’t help but think, “build it and they will come!” Owner Mickey Huttenhoff meticulously maintains the lawn to superb condition and he, along with his wife Ronnie, are the most gracious of hosts.

Play got underway Friday evening with temperatures still hovering in the 90s. Once the sun went down and the lights went on, the first test match between Illinois and Wisconsin battled on until 11:00 p.m.

Illinois followed up with two singles wins to close the gap with both Saad (IL) and Jeff Lee (IL) defeating  Mary Feind (WI). Bob Feind (WI) then pulled out a clutch win over Brown (IL) hitting a one-handed backwards jump shot at hoop #13 to snag his match. The last match of the evening between Bromley and Saad had more theatrics as Bromley scored two hoops in one shot when she hit a jump shot over Saad’s ball in the jaws at hoop #1 with the momentum carrying her ball through hoop #2.

Wisconsin finished up the night with a 5-2 test lead needing just one more match in the morning to win the test. Saturday’s games started off with Lee’s (IL) victory over Bob Feind (WI). It was looking as though Illinois would grab another win as Brown (IL) held the lead in his match until the 13th hoop when  Mary Feind (WI) managed to score the winning hoop and the test for Wisconsin. Bromley’s (WI) win over Lee (IL) was icing on the cake.

With a few hours of travel between them, Indiana and Illinois opted not to do a playoff for second and third place. Wisconsin’s team will now head to Tulsa, Oklahoma in August to compete in a national semi-final showdown with Colorado, Florida, and Missouri.

Individual game scores may be found at https://croquetscores.com/2019/gc/croquet-network-midwest-states-shield-quad 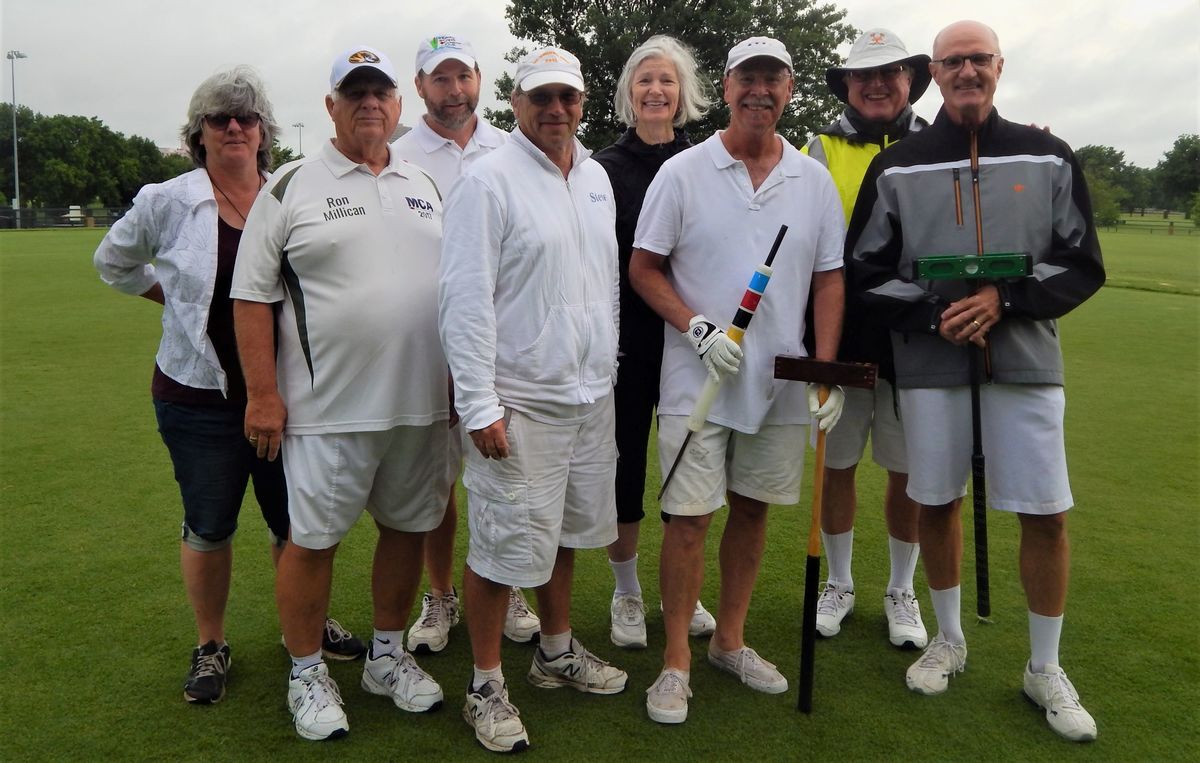 The States Shield once again delivered drama on an epic scale as Colorado pulled off an improbable comeback from a 3-0 deficit to steal the Central Quad title from Missouri by a 6-5 score this past Sunday in Tulsa, Oklahoma.
Read more…