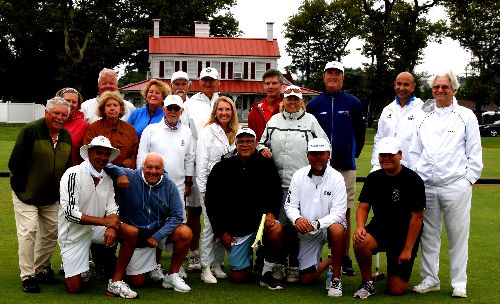 These players earned a tour card and will remain eligible for GC Tour play for a minimum of four years.

The money round knockout started on Friday with a few surprises. Ned Sperry defeated Tate Russack, Ahab Dincer and Justin Berbig only to lose to Bo Prillaman in the semi-finals.  New-comer Dennis Leddy was a powerful player, defeating Marc Stearns two straight and taking Macey White to the third game where Macey pulled out a narrow victory with a clean hoop shot on the tie-breaker from the boundary.  White lost to Sherif Abdelwahab in a well-contested match with battles at most hoops featuring many long clearing shots.  Bo Prillaman and Sherif Abdelwahab faced off in the finals in the rain on Sunday.  The sidelines were full of fellow tournament players who stayed for the finals and local players who came in to see the great players duel it out.  In the end, Sherif Abdelwahab prevailed with a 7-4, 7-1 victory to take the title, the Golden Jacket and a $2,000 check for first place.  Bo Prillaman won $1000 for second place.  Everyone in the tournament went home with prize money, even if in some cases it was only $1.

Special thanks go to Tom Cooper and the Green Gables club who hosted this event.